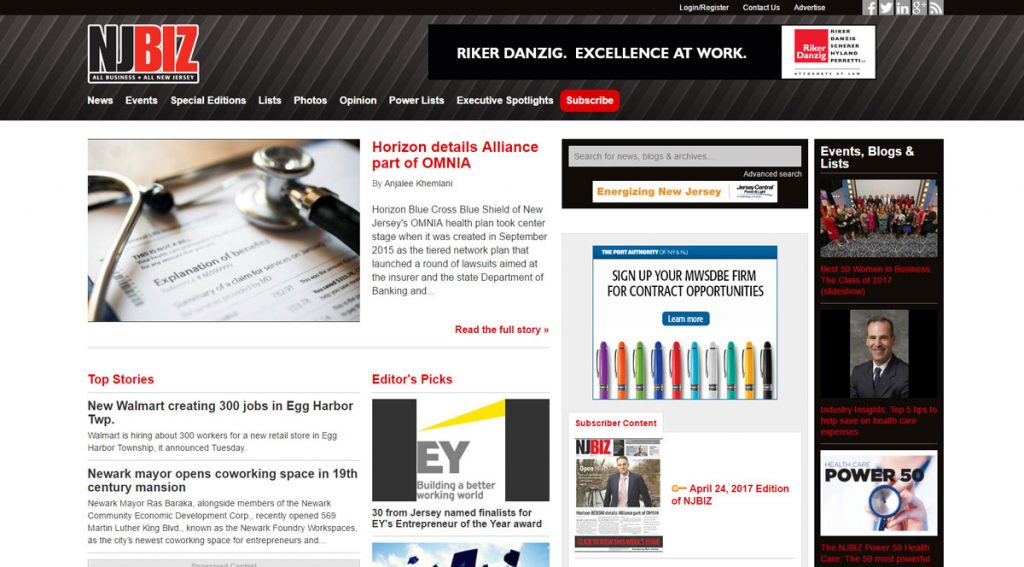 NJBIZ homepage for desktop. The dark column to the far right only loads for screens wide enough to handle it.

The responsive redesign and redevelopment of CPBJ.com, NJBIZ.com, and LVB.com was a major undertaking. All 3 sites were originally static and slow.

My belief was that there were 2 things slowing down the sites that we could control. First, the size of the pages and their resources. Second, the load building the pages put on the servers using the Saxotech CMS, a proprietary CMS which ran on their servers.

A comparison to the access I had to make changes with Saxotech would be much like having FTP access to a WordPress site’s current theme’s folder and nothing higher up.

I rebuilt the sites from the ground up. All new front end code (HTML, CSS, JavaScript / jQuery). All new streamlined and efficient code on the backend to build the pages of the sites. Upon launch, the measured page load times were cut in half.

This redesign made sure that all stakeholders and their individual goals were considered and addressed. The reaction from everyone was great. I regularly heard from newly hired reporters that the website was a selling factor for them taking the job at NJBIZ, CPBJ, or LVB.